THE actions of a quick-thinking window cleaner and a working smoke alarm have saved the life of an elderly lady after a fire broke out in her flat on Park Road, Timperley.
Fifteen firefighters and three fire engines from Stretford, Sale and Wythenshawe stations received a call from a window cleaner who happened to see smoke and flames through the window and called 999 early on Tuesday morning. 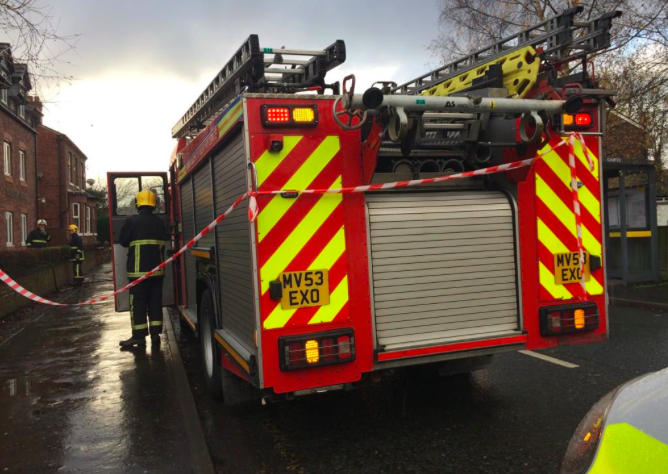 Image taken by Ben Levy at the scene. (via Twitter)

Cover jets were used inside and outside the property to bring the fire, which had started in the bedroom of the ground floor flat at Mayfair Court, under control.

The occupant, a 94-year-old lady, had managed to escape the smoke and flames because she had a working smoke alarm, which woke her up before the fire service arrived.

A Greater Manchester Fire and Rescue Service spokesman said: “The fire had started in the bedroom. It has left quite bad fire damage and the rest of the property is smoke damaged.

“A window cleaner happened to see smoke and flames through the window and called 999.
“While he was on the phone, the smoke alarm triggered and the woman managed to get out of the flat herself.

“She had a lucky escape.”

The woman was treated for minor smoke inhalation and did not require hospital treatment.
The cause of the fire is still unknown at this stage.

The fire service has put her survival down to a working smoke alarm and the quick-thinking actions of the mystery window cleaner, who they have been unable to trace.

Residents can get a free home safety check and smoke alarms for their property by visiting manchesterfire.gov.uk

Are you the mystery window cleaner, or do you know their identity? Get in touch on Twitter @Taaliah76