KATY B AND BECKY HILL RAISE THE ROOF @ THE ACADEMY

There’s countless ways to warm your cockles in Manchester on a cold Saturday night in October, my personal favourite would be a tough call between a spicy curry from Ziya in Rusholme or standing directly under the sub-woofer at the Academy while it pumps out a little drum and base.

Who better to push said woofers to the limits than dubstep princess Kathleen Brien, better known as Katy B?

Got the ticket n t-shirt, all ready to go…

Relatively new on the scene, Becky Hill played as the support act – and what an act she gave, kicking off the night with some great new material from her upcoming debut album as well as the smash hit of the summer ‘Gecko’ with Overdrive.

Pitch perfect vocals, sassy swagger and unfaltering cheekiness first seen during her stint on The Voice UK, Hill had the crowd jumping along to her impressive solo set.

And then came the headliner, the opening riff of ‘Hot Like Fire’ burst through the amps, sending the crowd soaring to their feet. A medley of recent hits and ‘5am’ made the atmosphere explode, setting the bar incredibly high for the rest of the evening

The crowd were enthralled as she belted out club classic ‘Easy Please Me’, showcasing her vocal talents further before bringing it down for the ever popular ‘Crying For No Reason’ followed by a heart-rending and emotive performance of ‘Everything’, which she dedicated to her older brother Andrew, who sadly passed away in September following a tragic accident.

The Academy took on a night club vibe

The pace soon picked up again and by the time the backbeats of ‘Aaliyah’ were rolling, the Academy was in full swing once again. A kaleidoscope of Lasers and strobe effects gave a real nightclub feel whilst the crowd danced along to ‘Easy Please Me’, showing their obvious delight as she mixed it with Lauryn Hill’s ‘Doo-Wop (that thing)’.

Katy was supported throughout the gig by a group of 4 backing dancers who, to be fair, deserve a mention of their own. Beautiful and perfectly in step with the star, they helped take the show up to another level, giving an almost arena like feel to what was really quite a small venue. Along with the stunning lights and laser action it was a feast for the senses that had the crowd mesmerized from the outset.

The stand-out track of the night, and possibly Katy’s best track to date, was ‘Still”- taken from her latest album she belted it out in fabulous style, managing to sound fantastic while busting some moves that Britney could only dream of. Amazing.

There is definitely something endearing, almost wholesome about Katy, a bit like a Blue Peter presenter crossed with a modern day Judy Garland, with her infectious smile and bouncing auburn curls – although I doubt Ms. Garland ever had backing dancers and breaking beats like this songstress.

Endearing and sweet yet with powerful vocals

Growing up in Peckham, Katy attended the BRIT school and has been singing since the age of thirteen, her first audiences being classmates that were wowed by her musical abilities and talent back then.

Emerging from the underground, growing in confidence and talent, Katy exploded onto the dubstep scene; and could often be found increasing her fan base on the nightclub circuit in London as she worked on several collaborations, guesting on numerous well-known tracks. ‘Tell Me’ is perhaps one of her best known hits from this time – DJ NG’s song with Katy’s unique vocal twist makes it still as much of a floor filler today as it was back then.

The crowd were jumping

Inevitably, as all good things must, the show began to wind down as Katy finished her set with the song that saw her rise to fame, ‘On A Mission’, much to the delight of the now sweaty looking crowd.

Thanking everyone for coming, Katy was met with yet more cheers before she briefly left the stage, returning for a 3-song encore starting with ‘Emotions’ before moving onto ‘Perfect Stranger’ and ending on the absolute classic ‘Lights On’.

There was not one person in the venue standing still by this point and everyone was singing along and throwing their best moves on fellow Katy B fans as the show came to a close.

It was a pleasure to see two young ladies doing what they love, and doing it incredibly well. The performance from both was brilliant; full of energy and incredibly uplifting, taking over the charts and the ears of the British public one track at a time, both have increasingly bright futures.

Expect to see much more of Katy B in the future, judging by her performance at the Academy she is a force to be reckoned with, and despite the timely gap between her first two albums – Katy B’s mission has only just begun. Leading into her third album, she has the lungs to put the wind up chart heavyweights Rihanna, Beyonce and Jessie J. 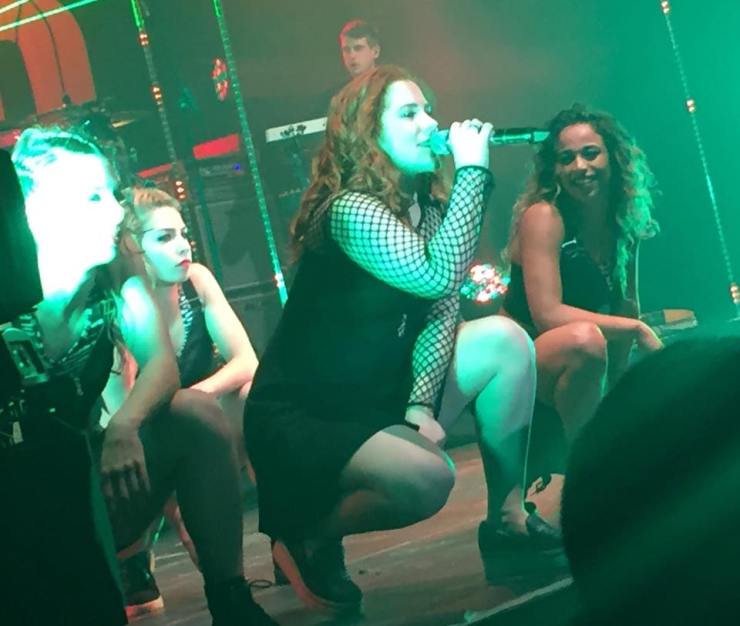 …and of course, Katy herself 🙂