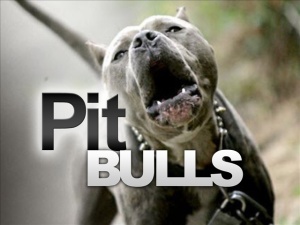 RESIDENTS of Sale West are fearful as two Pit bull dogs continue to roam around the estate unsupervised whilst killing and maiming cats at an alarming rate.

There have been reports of several cats being attacked by the two dogs with at least three being mauled to death in front of terrified witnesses.

One attack reported took place on the morning of July 19, where the dogs were seen “ripping a cat to pieces” next to the Brigadier Pub on Firsway, Sale.

There is growing concern as the summer holidays are due to begin this week, one resident said, “There are loads of children in the area and they will all be out playing in this lovely weather. It is only a matter of time until the dogs turn on a person, they are out of control and need stopping before it is too late.”

Another resident has spoken of her horror at discovering a dismembered cat paw on the grass near her home, “I can’t let my daughter out until they find these dangerous dogs, so many cats have gone missing recently and it’s just an accident waiting to happen.”

Both dogs are described as Pit Bulls, one is fully white and is possibly a male while the other is white and brown and believed to be female.

Despite both the police and dog warden searching the area the dogs have yet to be found.

The police are now appealing for help from the public and said, “Both dogs are Pit Bulls and are believed to be living on the Sale West Estate. We can only work off information given to us, please get in touch and tell us if you know who they belong to or where they are being kept.”

Information can be shared with the police, in confidence by calling Crime Stoppers or by contacting the station and officer direct on 66099@gmp.police.uk

In case of emergency please call 999

Image courtesy of CreativeCommons and is for illustration purposes only.

I am a reporter at MEN. I am trying to get in touch with the author of this report or owners of any cats which have been attacked. My number is 07831 437011